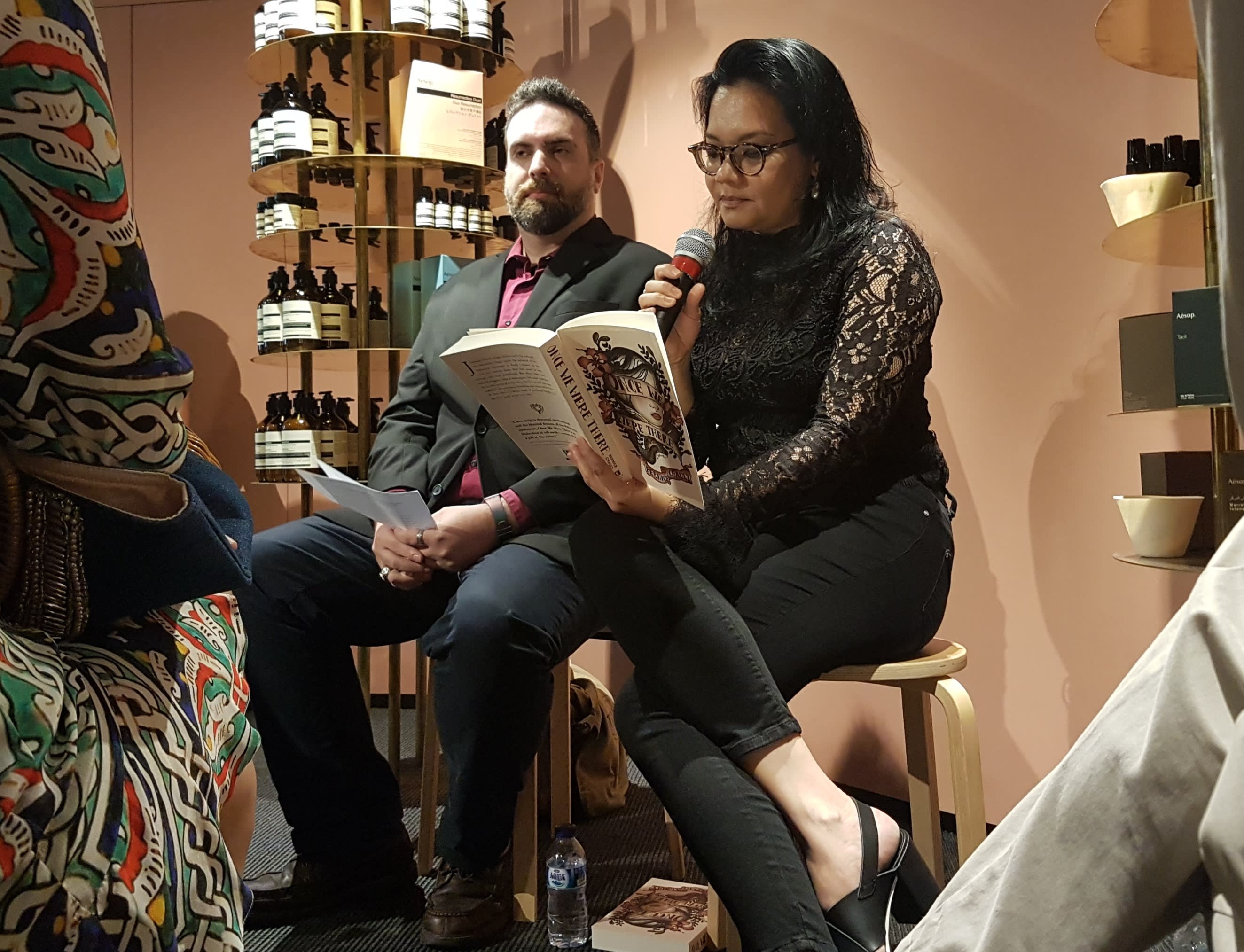 Author Bernice Chauly reads from her new novel “Once We Were There” in Singapore on June 29. (Courtesy of Epigram Books)

KUALA LUMPUR Bernice Chauly, a prominent figure in Malaysia’s literary scene, looked relieved as she reflected on her six-year journey to become a fiction author. “Everything about writing a novel,” she said emphatically, “is difficult.”

Her debut in the genre, “Once We Were There,” is a racy, dark and sexually frank political novel set in Kuala Lumpur during the bleak years of the Reformasi era, a unique period in Malaysia’s contemporary history.

At the end of the 1990s, groups of young, educated and affluent Malaysians of all classes and upbringings took to the streets in support of Anwar Ibrahim, a welcome wind of political change to many, after he had been ousted as deputy prime minister by then-Prime Minister Mahathir Mohamad. Mahathir had just equipped the Malaysian capital with the Petronas Twin Towers — at the time, the world’s tallest building — to boost the nation’s confidence as it stepped into the limelight of the developed world.

“Anwar was our hero. We needed one to contrast Mahathir and believed in the possibility of a better country,” Chauly told the Nikkei Asian Review. “Back then, K.L. was unlike any other city I’d ever seen or lived in. I still think it’s one of the most fascinating cities on the planet.”

Chauly was born in 1968 to Chinese-Punjabi teachers in George Town, the capital of Penang State, in northwestern Malaysia, and studied English literature at the University of Winnipeg as a government scholar.

Based in her beloved Kuala Lumpur since 1992, she has distinguished herself as one of her generation’s most versatile voices, working as a photographer, poet, filmmaker, actor and educator. “Once We Were There” depicts Kuala Lumpur’s political struggles, as well as its hedonistic side. (Photo by Epigram Books)

Chauly now teaches creative writing at the University of Nottingham Malaysia Campus in Kuala Lumpur. She also has served as director of the George Town Literary Festival — one of Southeast Asia’s key international literary events — since 2011, and is the author of five other books: three collections of poetry, one of prose and an acclaimed 2011 memoir, “Growing Up With Ghosts.” The memoir traces the roots of her mixed ethnic background and the hardships her parents endured as a mixed-race couple, and deals with her father’s death. Her first novel, however, was a struggle. She began researching the theme in late 2011 while on a six-week writer’s residency with the Nederlands Letterenfonds (Dutch Foundation for Literature) in Amsterdam.

“I wanted the historical facts to be accurate. I looked at the Reformasi’s timeline and Sabri Zain’s ‘Reformasi Diary’ documenting the protests from the streets,” Chauly said. “Whatever was relevant to the characters is mentioned in the book.”

Her original plan was to start the novel’s narration in 1998 and conclude it a decade later. “But I quickly realized that it was too ambitious and settled with ending it with Anwar’s release [from prison on a sodomy conviction] in 2004,” she said.

“Once We Were There,” published by Singapore’s Epigram Books, pulls no punches in fictionalizing the lives of some of Malaysia’s middle-class rebels. The female protagonist, Delonix, or Del, is an idealistic journalist working for online news portal Saksi.com (“witness” in Bahasa Malaysia) — an actual independent online outlet at the time, to which Chauly contributed — surrounded by a world of other reporters who do not fear the police’s tear gas, engage in a liberal and sexually open lifestyle, and talk revolution over hard liquor. Their hedonistic exploits are set against the backdrop of a political history that still resonates in today’s Malaysia, where Anwar Ibrahim is serving a five-year sentence following his second conviction for sodomy, allegations he denies.

“Where are we now? In deeper mud than before,” Chauly said, citing the imprisoned Anwar, the scandal-plagued government of Prime Minister Najib Razak, and a comeback by Mahathir. “Such a mad political scenario is almost impossible to script, and yet it’s real.”

The book was published just before Malaysia banned eight books in August, claiming they contained “deviant discussions” of Islam. Among them is one by Malaysian writer Farish A. Noor, “From Majapahit to Putrajaya,” originally published by Kuala Lumpur’s Silverfish Books in 2005.

Chauly does not seem worried by the controversial tone of her novel. “Book-banning in Malaysia has been going on for decades, and it’s ridiculous that Farish Noor’s book was banned after having been on sale for a staggering 12 years,” she said.

However, Chauly’s novel not only touches on sensitive sociopolitical issues, it also contains a high dose of graphic sex, drug use and self-abuse. “Human beings are sexual creatures, so why shouldn’t my characters be?” she explained. “Marina is a sex worker and gets sexually assaulted by the police … . It’s all real.” But Chauly noted that it was the city’s underbelly that she was most interested in. 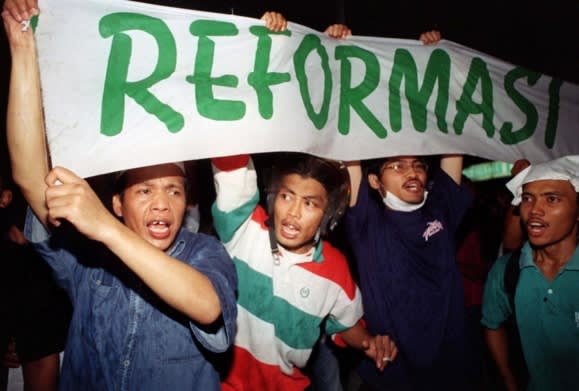 The Reformasi era in the late 1990s was a unique period in contemporary Malaysian history.   © Reuters

“I was on the streets during the Reformasi, and the years preceding it were very transformative. I wanted to write about that kind of gritty, raw and messed-up K.L., the drug scene, the underground, the music, the international DJs who flew in from all over the world just to party and then fly back. There’s no way I could have glossed it over, because a lot of the people who were part of the Reformasi were a mixture of anger and idealism,” Chauly said.

“I’m not going to say who’s who, but the characters are just composites of people in the scene at the time. It was crazy, crazy years. … We were living life on the wild side.”

To Chauly, modern Malaysian youths are not as idealistic as those she joined in the period described in “Once We Were There.” Even so, idealism is still present. “They come out during the bersih [clean] street protests, they are actively involved; but at the same time, there’s a lack of knowledge about what really happened during the Reformasi,” she said. “Those of us who were on the streets in 1998 are now parents in their 40s and 50s. We remember what idealism means, because we believed we could change the country.”

Today, those values are mostly lost, and the same guiding lights seem to have dimmed even in the world of Malaysian literature. “Compared to Singapore, which produces good poetry and good-quality novels, Malaysia is in a very worrying situation,” Chauly said. “We have a lot of genre fiction and way too many short-story anthologies, but we live in times of great transformation, and we need written records of what’s happening.”

“Are contemporary Malaysian writers afraid? Do they self-censor because they think they won’t get published?” she asked. “I don’t know. But in this case, what are we going to remember then, 100 years from now?”

← Review: Once We Were There – debut novel breaks every taboo in the book for Malaysians
Article: Literary town →